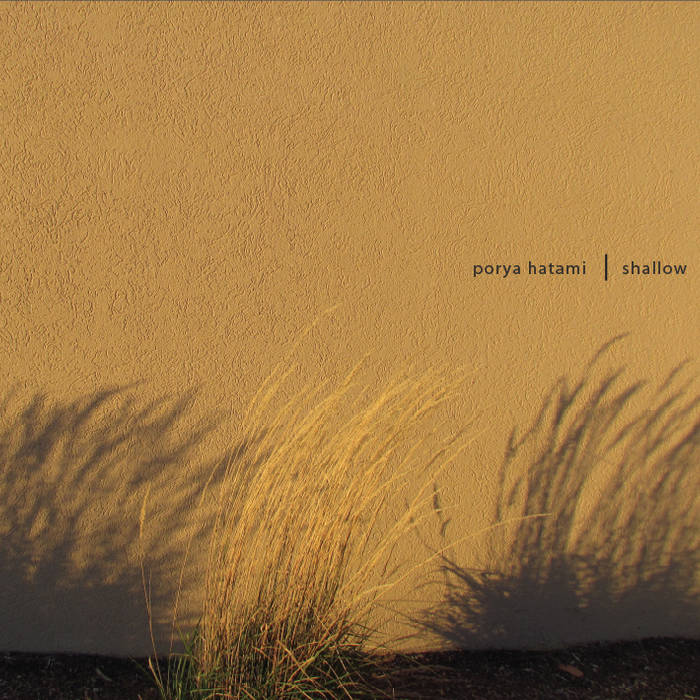 Lab's Cloud Thanks Porya Hatami for the great mood this piece takes me. Favorite track: Fen.

Joe Big Mac After the rain,got me into this type of music and is my absolute perfect for a audible massage.. thanks Favorite track: After The Rain.

Michael Ash A masterpiece. In a realm - and on a level - all it's own. Favorite track: Fen.

His upcoming release for Baltimore’s Tench is a half-step away from his recent experiemental efforts. The 43-minute, 3-track, album presents a serene collection of sounds that enduce tranquility and peace of mind. Soft pads, fluttering chimes and recordings of flowing water create a zen-like enviornment that seems to conclude as nearly as quickly as it starts. I caught up with the producer to discuss the album, his homeland and what we can expect to hear from the budding music-maker this year.--- Dustin Morris ( a strangely isolated place )

Some of Shallow is taken directly from the fens and streams, some from the sky and rain, and some from soft breezes in the trees (as in White Forest), while parts are symbolically reminiscent of those places and experiences (real or imagined). There is deep sense of warmth in Hatami’s work. At times it’s so delicate and tender and at others it gently soothes and envelops–allowing one to drift freely into an imagined experience (like where Fen transforms from an environmental to more of an inner dream or even underwater experience at the mid-point of the piece, before returning again to the outdoors—as if from reality to dream and back again). After The Rain opens as if soft comforting rays of sunshine have entered the morning with a fresh mist still falling from trees or eaves (you can decide). ---- wajobu.com

The music enfolds you, drifting to a point where pillow-diving seems like the only real option left. The deeper you go, the more gems you unearth. The calm is always here, present in the soothing ambient wash and the very stillness that comes with it. It can be felt in the air, in the spent, casual cool, after the rain. Arpeggios slowly slide over smooth stepping stones that ascend with a constant, deep tranquillity. Content in their being, the music doesn’t attempt to flaunt or show off its beauty. Instead, it radiates beauty naturally, with no make-up or perfume in sight. Nothing is forced. Everything is perfect. --- Fluid Radio

Shallow is the exquisitely patient work of a master sound sculptor. One of my very favorite things to do is walk on an isolated beach at the break of dawn with only the sound of lapping water, birds, and sea breeze as company. This album is the closest I have heard to recreating that feeling through music and sound. It is rich, organic, tranquil ambient at its best. --- Stationary Travels

There is no echo here, no distance at all between listener and music. The music might as well have been heard by osmosis. Shallow is a misnomer for Hatami’s music; he’s sunk chest deep.---- igloo magazine

The album as a whole has a very cohesive sound and a strong sense of gradual unfolding and coherent progression. Across all the tracks the softly ascending patterns set between a calming background drone and a free play of high tones recur. Hatami’s compositions work by setting pools of soothing, softly stirring stillness against looping rustles of activity, adding gently rolling upward gestures, and overlaying the whole with bright melodic shards that cluster and glisten in a graceful, fluttering dance of light. The sharp, glistening edges of the foreground sustain motion and prevent a lapse into the soporific. Shallow is a beautiful recording, essential listening. I expect to be listening to it regularly and with gladness for a long time to come. ---- Music Is Good

Shallow is an intense 43 minutes of some of the most beautiful music put to tape. --- Tome to the Weather Machine

Hatami sticks to the promise that these recordings will be “rich in tone”, for here are three compositions which evoke places known and unknown, minimalist yet multi-textured and – in contrast with that album title – blessed with so much depth ---- Leonard's Lair

On Shallow (tench), he has undeniably reached a new plateau. The album is remarkably concise, but condenses many years of experience, insight and ambition into its three tracks, with 22-minute opener "Fen" leading the way with an epic multi-movement arrangement and multilayered structural complexity. Hatami is perfectly fine with the idea of seeing this music as an escape from the burdens of daily life. And yet, it is always a lot more, suggesting a wealth of deep new experiences at every listen. Hatami may not re-invent the concept of blending electronic elements with field recordings in his oeuvre – but he does make you realise why you loved it so much in the first place.
---- Tokafi

all sounds recorded and produced by Porya Hatami